Gifts for the Android Lover

ChromeCast  - $35
This is a great gift at only $35 that will pack a big punch this holiday season! Just plug the ChromeCast device into your HDMI TV set and you are ready to stream content from pretty much any Android device. My kids love watching their favorite YouTube videos on the big screen with this, but there are so many other uses. At this price it makes a great stocking stuff for anyone in the family including college students and hard to buy for parents.

Nexus 7 - $199
Forget the iPad Air and go for a Nexus 7, which is currently on sale for $199 for the 16GB (or $279 for 32GB) This snappy little Android tablet is a perfect gift for the techie traveller. It is basically a giant Android phone and won't disappoint. My kids love this device and have all their favorite apps installed. Fits in my purse to take to restaurants to entertain the kids. For me, the Nexus 7 is my preferred reader device and where I use my Kindle App the most. This one has great multi-user support, so the whole family can use it as our own device. We have several tablets, and this is hands down our favorite.

I would recommend going for the 16GB if budget isn't an issue.


Chromebook - $244
I'm writing this post from my own Samsung 11.6" Chromebook, and I love it! For $244 (it is currently $5 off at Amazon, plus free shipping) you really can't beat it. The only thing my family can't do on a Chromebook? Play Minecraft, which is major problem for the kids. But it is perfect for me and what I use 100% of the time now. When I have it out and about people always want to check it out and ask what it is. Sure, you will have to use Google Hangouts, instead of Skype, and Google Drive Apps instead Microsoft's suite. However, the future is in "The Cloud" so I'm confident in my choice. The Chromebook also does an excellent job of managing users, so whomever is logged in feels like it their own laptop.

This is what Santa is bringing the Grandparents this year...shhh!

Nexus 5 - $349
This is a high end splurge, but running pure Google Android 4.4 (KitKat!) the new Nexus 5 will put a smile on anyone's face. Available in White or Black and with 16GB or 32GB, this phone starts at $349 shipped from Google. With a slim 5" display Google claims it "keeps you connected at blazing speeds. Add in the cutting-edge 2.26GHz Qualcomm Snapdragon™ 800 processor and you’ll race through games, zip around the web and switch between apps at the flick of a finger".  Personally I hate that cell phones keep getting bigger and bigger, that is what the tablet is for. But if you like the latest and greatest, the Nexus 5 is it!


Google Play Gift Cards - $10, $25, $50
These Gift Cards are also great gift and can be found at numerous stores (including Target, Walmart, Safeway and a dozen other retailers).  They can be redeemed for Apps from the Google Play marketplace, along with music, books and movies. My kids will be getting a few of these in their stockings.

A few other ideas are the Nexus 10" tablet which is currently at a great price on Amazon for $90 off),  and the high-end ChromeBook Pixel with touch screen for $1649. 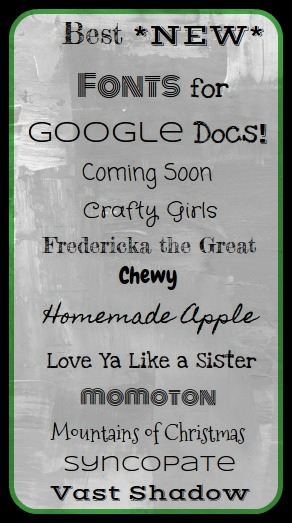 If you aren't using Google Drive yet, you should be! While it isn't perfect (yet) the mobility and ability to share seamlessly make it my go to document editor.

Google Drive is great for functionality, but I want beautiful documents that are easy on the eyes. To do that you need to install additional fonts into Google Docs from the Fonts Menu.  There are over 450 fonts to choose from, but these are the best new fonts in Google Web Fonts:

Adding these 10 fonts to the basic preinstalled fonts will help you develop attractive and creative documents quickly.

Currently you cannot add new fonts to Google Spreadsheets (or Google Sheets, or whatever they are calling it this week). I'm sure that will change in the near future and it will work similarly.

Quick video of how to add the new fonts to Google Docs: 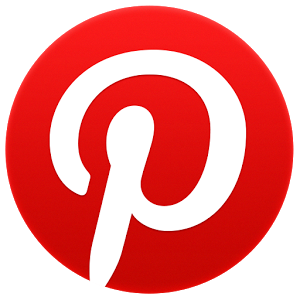 New social networks seem to pop up everyday, but Pinterest is one that is generating lots of buzz. Pinterest defines itself as "a tool to collecting and organizing things you love". If you are a visual person and haven't discovered Pinterest, then check it out!

The things you can collect and organize are endless: recipes, fashion, hair and makeup tutorials, photography, travel, exercise, crafts and design are just beginning examples what others are pinning on Pinterest.

The Pinterest app for Android (and iOS) is free.
6 comments:

Google Drive is a group of cloud based products that include Documents, Spreadsheest, Forms, Presentations and Drawings. There is nothing to install or save, simply type drive.google.com in any browser and you're ready to go.

With Google Drive all your data is stored online, in "the cloud". Basically that means your documents are not stored on the local hard drive of the computer you are typing it on. Instead those documents are stored on Google's own servers around the world.

The upside? The upside is limitless, from enabling access anywhere, tight security and sharing controls, awesome real-time collaboration and revision control. Instead of emailing documents back and forth with friends and colleagues, I simply give them direct access to the Google Doc. I don't have to worry about anyone messing up my document, since version control let's me see all the changes they made and step back to an older version if necessary.


Google Drive is the anti-Microsoft Suite, so don't expect it to replicate all the bells and whistles you find in MS Word and Excel. Google likes to keep things simple and clean. If there is a specific feature you're missing, use the "Connect More Apps" button to more functionality to the basic app. A few of the most useful Google Drive Apps I've used are:

Get the Free app now
6 comments:

I use lots of apps on my Android, but CardioTrainer is hands-down the best one. I have reviewed it in the past, but wanted to give an update. I recently completed my fourth Half Marathon and used CardioTrainer for all my training and on race day, and I have been really impressed.

I will never understand why you would have a runner's watch and an mp3 player. Just strap on your smart phone and you are set! Friends always tell me it seems like your smartphone is too big to run with, but it really isn't. Aside from tracking my workout and playing music, I have my phone in case of emergency.

For awhile I was just using CardioTrainer until RunKeeper got it's act together with Android, but by the time that happened I was already hooked on CardioTrainer.  I use the Free version of CardioTrainer and it has more features than RunKeeper Pro ever did. I love that I can look back over my history and track my workouts, pace and miles. It really helped motivate me and one up myself.


If you are a runner, even a beginner, I encourage you get this app and start tracking!
1 comment:

If you are a book lover without time to actually read, Audible may be a great app for you. Owned by Amazon, Audible has over 100,000 audio books you can download to your mobile device. I find it great for road trips and the kids when they are in a reading slump. One of my favorite features is that it has a huge number of titles younger readers.

The Audible app, is free, but the subscription service is where you will pay. There are several plans available, starting at $7.49 for the first three months, which includes credit for one free book each month. You can cancel at any time, or trade in a title you didn't like. However, many complain about losing credits and the cancellation process being difficult.

Price: Free
Get it Now
No comments:

Pandora is a free Internet Radio app, which learns the type of music you like. Whether you have an Android, Apple or are just a PC user, Pandora has you covered. Even my Samsung TV and TIVO DVR have Pandora apps. Pandora requires a data connection to stream music, and is best used over WiFi to avoid extra data charges on your mobile device. 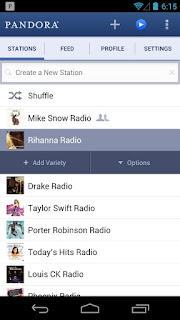 Pandora is best when it knows you well and has been tuned over a period of time. Using the same Pandora account between all your devices and eventually you can build the perfect station. By "Adding Variety", adjusting the "Options" for your stations and using Thumbs Up/Thumbs Down liberally Pandora will learn what music you really like. On your desktop, no app is needed, just go to their website to get started.

Recently Pandora has set a 40 hour listening limit on mobile devices. You can skip up to six songs an hour and twelve songs a day. 15 second ads are played every 30-60 minutes. By upgrading to Pandora One for $36 a year or $3.99 a month and can avoid the listening and skip daily limits, and your music will never be interrupted with ads.

Price: Free with ads, $36 annual/$3.99 month removes all ads
Get Pandora for Android

If you're an ardent blog reader then Google's recent announcement on the demise of Google Reader left your scrambling. I use Google Reader to organize and read through a couple of hundred blogs, along with keeping track of comments on my own blogs. So needless to say, this leaves a gaping hole in my quest to wrangle useful information from the internets.

As a Chromebook user, the choices for a Google Reader replacement are a little more difficult to find. And mind you, I'm not looking for anything fancier or more visual. I am also an avid Pinterest Pinner, but when I read my favorite blogs, I'm looking for content - not pretty pictures. For now I have settled on Feedly. Mainly because it meets all my Chromebook and Android needs and because I think the Feedly team understands the way I gather information. (Checkout the Feedly blog for more on that.)

By changing the Settings View to 'Title' I can get a more meat and potatoes view of my reading list, and it feels almost like Google Reader. I imagine in time I will switch to the default Magazine View, and embrace a little change :)

Feedly is available for FREE from Google Play for my phone and tablets and is also available as an Extension for the Chrome browser  (apparently referred to as Feedly Plus) and an App for the Chromebook - so they have you covered!

So RIP Google Reader... you will be greatly missed.
No comments: