All the kids are doing it! Literally. So why aren’t you? Oh, you’re not a kid, but a mature, responsible parent and don’t have time for the latest mindless craze, you say. My advice is to ditch the Candy Crush and Words with Friends, and instead engage with your children, or even grandchildren, in a surprisingly rewarding way with Pokemon GO.

You don’t have to understand who Ash and his crazy anime pets are to get started. Just look outside your window at the neighborhood kids who have suddenly taken up walking and biking the last few weeks to know something big is going on.

Pokemon GO is basically a combination of a Scavenger Hunt and a game of Rock, Paper, Scissors. First you must collect your rocks, papers and scissors in the form of Pokemon. Hundred of animals can be found on the map based game, but the trick is that you actually have to move around to collect them. All you need is a fully charged smartphone and a young person aged 7-27 and you are ready to go. If you have a bike and live near a park, school, church or downtown area then even better.  Many places that would be identified as landmarks on a map (statue, sign, fountain, etc) are PokeStops in the game, and a hotbed of activity.

The reason you, the parent, should be playing this game is to bond with the Pokemon GO obsessed kids and young adults in your life. As any parent knows, it gets harder to find common ground with teenagers. Moody, video game obsessed kids don’t always have much to say.

Now Pokemon GO is our common ground and a language we both understand. This is an opportunity to share an afternoon or evening (when a Ghastly might be around) getting fresh air and exercise with them.

“Your Mom plays Pokemon...? Cool” was the response my son got when I informed the after sports carload of 14 year old boys that I had caught a Rhyhorn as I waited for them. The boys were all fascinated that I have a Ekans spawner in my kitchen (that’s Snake spelled backwards for you noobs) and they all came over to catch one themselves.

My pre-teen is a little easier to engage, yet this game gives us a new way to interact. “Hey Mom, there’s a Lure down the street!” he says, and we both hop on our bikes and spend the next hour putting kilometers on our Egg Incubators, collecting balls at PokeStops and checking out the local Gyms. All while catching Pokemon along the way. We’ve done that three times today and only came home when it got dark. Parenting note to self, we need lights on the bikes. And phone holders too.

Most of the fun of the game is finding and catching the Pokemon. For a special treat, I took my family out to lunch in downtown Mountain View, CA which is the heart of Silicon Valley. Within a hour our batteries were all dead and we had dozens of new and evolved Pokemon. Plus we were witness to a phenomenon. Hundreds of people roaming downtown with their phones out. They were waiting in line for gelato and iced tea. Businesses had signs out front with brag lists of which Pokemon had been caught inside their stores. Restaurants were advertising their WiFi networks, but warning that there is lag today. There were near Black Friday type crowds trying to Catch ‘em all!

Pikachu (God bless you), is the ultimate prize and when one appears in your vicinity it is perfectly okay to yell “Pikachu in da house!” Then watch as everyone scrambles for their phones and attempts to catch the little yellow creature, that is always smiling. My favorite Pokemon has always been Jigglypuff. Who can resist a cute, pink puffy warrior  who sings his opponent to sleep with a beautiful lullaby? “Jigglypuff, jigglypuff”. Feminine, yet strong. Killing them with kindness, literally. On man, I gotta catch myself a Jifflypuff!

My 21 year niece attends college nearby, and usually turns down our invitations to meetup.


Me: Would u like to join us for dinner and Pokemon hunting in Palo Alto tomorrow evening?
Niece: Sure, that sounds like fun! :)

Cha-ching! Pokemon aren’t the only thing I’m catching with this game. Suddenly the young people in my life have time for me.

The app Pokemon GO itself, is a terrible app. Expect it to crash and hang on a regular basis. Get ready to reboot your phone multiple times, and curse the developers. Also it will drain your battery and possibly install malware.  But, the kids don’t mind so neither should you. A few tips I’ve learned from my 11 yr old: put your phone in battery saving mode, turn down the screen brightness and turn off AG (Augmented Reality, but you knew that already, right?). Augmented Reality is one of the unique aspects of Pokemon GO, but also a major battery drain.

The game is free and has in-app purchases. In my experience Pokemon GO is guaranteed to get you hours of interactive and one-on-one quality time with the young people in your life. Time with my boys: priceless.
51 comments: 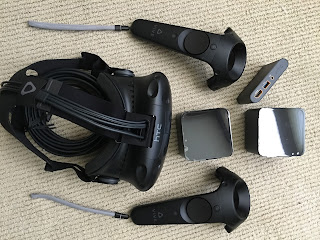 If you 've always dreamed of joining Captain Jean-Luc Picard on the Holodeck, the HTC Vive is your chance! Our Vive arrived last week, after ordering it back in February, and was met with excitement from the whole family. We cleared out our mostly unused office and declared it "The VR Room", and it is now the most popular room int the house.

We needed a new amp'ed up PC that we custom built, and decided on a pair of light stands to hold the light boxes. These are a great deal at Amazon for only $22. This was a big investment, about $3400 total

I can't wait to start reviewing our favorite Vive games! So far the most popular are classic arcade style shooters, and everything in Valve's Lab (Secret Room, Robot Repair, Longbow, Xortex, etc).

Favorite VR games so far:
Budget Cuts
The teens have loved the Budget Cuts demo. They navigate their way around an office space, avoiding killer robots, while trying to locate their resume. The Call of Duty expert in our household knew exactly what do to and never missed a knife throw. I've found myself crawling on the floor and attempting to lean on virtual walls (oops!) in this engrossing game. Can't wait to see the full game!


Job Simulator (included in our pre-order)
The 11 yr old loves this! He can't get enough of "eating donuts", making copies of donuts, then eating more donuts. He can play this for hours, but the grown ups don't really see the point of this game. My son says the point "is to mess around with stuff." Enough said.

Tilt Brush  ($29, included in our pre-order).
My personal favorite is Google's Tilt Brush, which basically puts you in right in the middle of a paint program. After goofing around at first, I built a beautiful room hat is really relaxing to create in. The creatives in your household will love Tilt Brush.

I'll do a more complete review of each game and include videos soon.